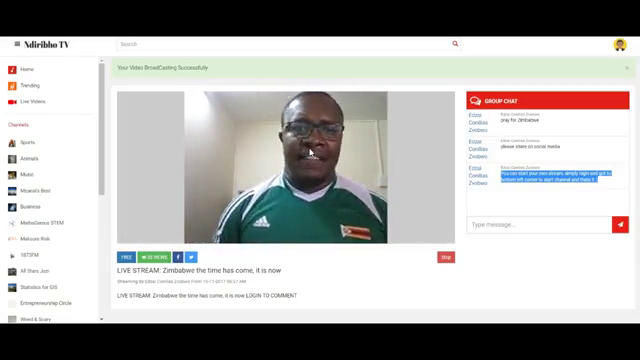 Also labeled as the “African YouTube”, Ndiribho TV is one video streaming platform originating from Zimbabwe with the owner Edzai Zvobwo reminding the world that every individual living here has got the right to express.

To make their opinions heard and their experiences shared Edzai has launched a video hosting and sharing platform for Africans to get more connected to the world which the continent has never seen before.

Edzai basically had the idea of bringing the current affairs into the limelight portraying their wrongdoings by sharing various videos and interviews online.

NdiribhoTV was ideally named to signify the rights that the commons have been denied, to bring justice to the ones who have been unheard or is fighting for the improvement of the nation. The meaning of Ndiribho in African colloquial terms is “I am fine”.

The platform is a user-generated one that associates video content makers and buyers by giving a user-friendly live streaming and video on demand platform.

NdiribhoTV gives anybody with a channel a chance to broadcast live recordings and transfer them straight from their camera gadget. This enables African individuals to share or watch continuously when any news is breaking, visiting another place, or meeting individuals and sharing concerns real-time.

StreamHash is the turnkey solution which hosts NdiribhoTV. Without much of an expense, Streamhash has been the one-stop solution to Edzai’s problems. He now owns a YouTube clone where he can host, record and share videos. With the impeccable video streaming script of Streamhash and an imperative CMS the African community will probably now be able to streamline their thoughts to the world.

NdiribhoTV interfaces video content makers and buyers by giving a simple to use live streaming and video on request platform. It even gives you a chance to share live recordings and transfer them straight from your gadget.

To the left side of the page, you would notice options such as “live videos” and “trending”.  Any live stream that has been commenced within 24 hours can be viewed if missed real-time.

The trending section broadcasts the videos which have the most number of viewers and can influence the other lot of the crowd.

Just below the trending section, there are some channels which are differentiated according to categories such as sports, entertainment, music etc. The channels which have been the most hyped actually is gifted a place in the column.

Since StreamHash is the platform ready to serve the NdiribhoTV with its brilliant Video CMS software, it needs to incorporate the technologies used by the StreamHash model itself.

These mind-blowing technical aspects include:

Stripe payment gateway is incorporated keeping in mind the little aspects of monetization. PayPal is integrated as well since NdiribhoTV looks at gaining attendees from all over the world.

Pay-per-view is included to monetize live video streams as well.

With StreamHash you need to stop worrying about scaling your business. You can now accept payment globally.

With one-time cost video CMS giants, StreamHash will host your site and upgrade it for life. Your platform will be ready with a brilliant front-end, a communicative admin panel, excellent SEO, the most secure and robust payment gateways and a platform independent feature so that you can run in both on Android and iOS.

NdiribhoTV focuses totally on African issues. Live video streams and on-demand videos are being monetized using pay-per-view and channel-centric micro-subscriptions which meets the need of the content creators.

Create your own video streaming platform to address things that never been portrayed and to make everyone aware of your surroundings just like Edzai did.