Case Study: How can we launch a successful OTT platform 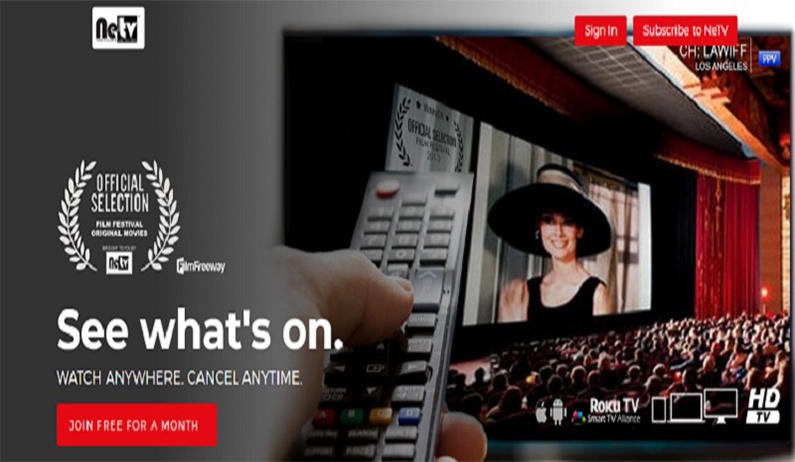 If we consider today’s scenario of video content consumption, the audience is massive. In fact, it is large enough to accommodate Netflix, Hulu, and Amazon Prime altogether. People love watching videos. When one-third of the internet traffic is videos only, there is massive scope for new entrants in the market to claim their share of revenue from this $20,501 million industry.

Considering this trend, a large number of entrepreneurs, who see VOD as a billion dollar industry, are entering in the market with their video streaming services. Netflix being a global example of a well-planned and efficient video streaming service, entice almost every VOD entrepreneur. Our collaboration with the founder of “Netv.net”, Simone, was a result of one such enticement with the Netflix business model and its portal’s architecture.

The primary focus retained the intentions to fit original films from film festivals. Numerous film festivals occur everywhere on the planet. Many of them win some prestigious awards. However, such high valued content gets lost in the crowd of massive commercial films released every week. What a waste of some high-value and revolutionary content! The founder of NeTV wanted to give a commercial platform to such content. A win-win relationship where these awesome content creators get a platform and the platform gets some high valued, unique and exclusive content for its audience.

As we started evaluating the requirements, we found the following main challenges that needed our prominent attention-

The challenge was to tweak the Registration flow with a custom requirement, which demanded the following flow:

Netflix has done an exceptional job of anticipating the consumer needs and preparing its platform accordingly. After analyzing the requirements and post multiple communications with the client, the most suitable solution we settled on was a Netflix clone script. We selected our StreamView Netflix clone to do the job as a base script for the project.

The main reason for selecting the StreamView script was its similarity with Netflix’s architecture. Moreover, as per the client’s requirements, this script also offered the exact UI that he wished for. Just a few tweaks and UI-design would have been ready.

Requirements that were fulfilled by the base clone Script

Luckily, a majority of the requirements were seemingly being fulfilled with clone script alone. Here is a list of requirements and how Netflix Clone was able to offer the same with minimal or negligible modifications-

Based on the requirements analysis and solutions we proposed, an SRS document was prepared and shared with the client. After three iterations involving the client’s approval and modifications, we finalized the final document and started with the Implementation phase. With most of the requirements being already fulfilled with the base Netflix clone script, we moved to the customizations phase.

As the majority of requirements were fulfilled by the based script, we had to perform minimalistic customization on the following features-

Technologies utilized in the project –

The Readymade Netflix clone script was built on the following technologies.

We followed the agile model to develop the final script. Post each phase, the project was sent for review to the client as we kept posting of the progress through Trello Project Management System.  The process continued in the following sequence-

As per the customer requirements, the following applications were delivered to the client. All of the applications are synchronized with the WebRTC version of the project through a web service script.

The stable versions of the website and all the applications are now live. In a very short span of launching the service, the platform was able to get some decent number of customers. The business is performing extremely well with is unique value proposition of exclusive content, affordable plans, and multi-platform support.

The client speaks and as we quote-

When asked the Founder about experiences with StreamView clone and StreamHash’s team, here is what he says:

Q1 – What made you start NeTV?

I have been working in the industry as marketer analyzer for many years, and since the beginning in early 2012 I have noticed that filmmakers work hard but not always received the recognition they deserve. NeTV is behind the filmmakers allowing them to easily distribute and profit their movies soon after attending the Film Festival. Many films get lost nowhere unless continuing financing the film in the hope to find distribution without losing any rights or loyalties. With NeTV it is possible.

Q2 – What makes NeTV stand out from the crowd?

NeTV is an independent network. Our platform will broadcast only originals independent films from festivals.

Q3 – Who are NeTV customers?

All major film festivals organizations around the world will join NeTV with their movie programs, from feature movies to short movies of any genre.

Q4 – How did you find StreamHash?

We have found StreamHash through the internet as it is the best-voted company outside the US to develop such a platform like NeTV.

Q5 – What challenges were you experiencing prior to purchasing our product or service?

None that I remember.

Q6 – How were the initial conversations with StreamHash Sales team? Can you specify how easy it was to gather requirements and kick off the project?

It was very simple to request the services through their website and soon after one of their personnel connected with us via Skype.

Q7 – How was your experience with StreamHash during the development process?

Excellent, they are working hard around the clock, always available.